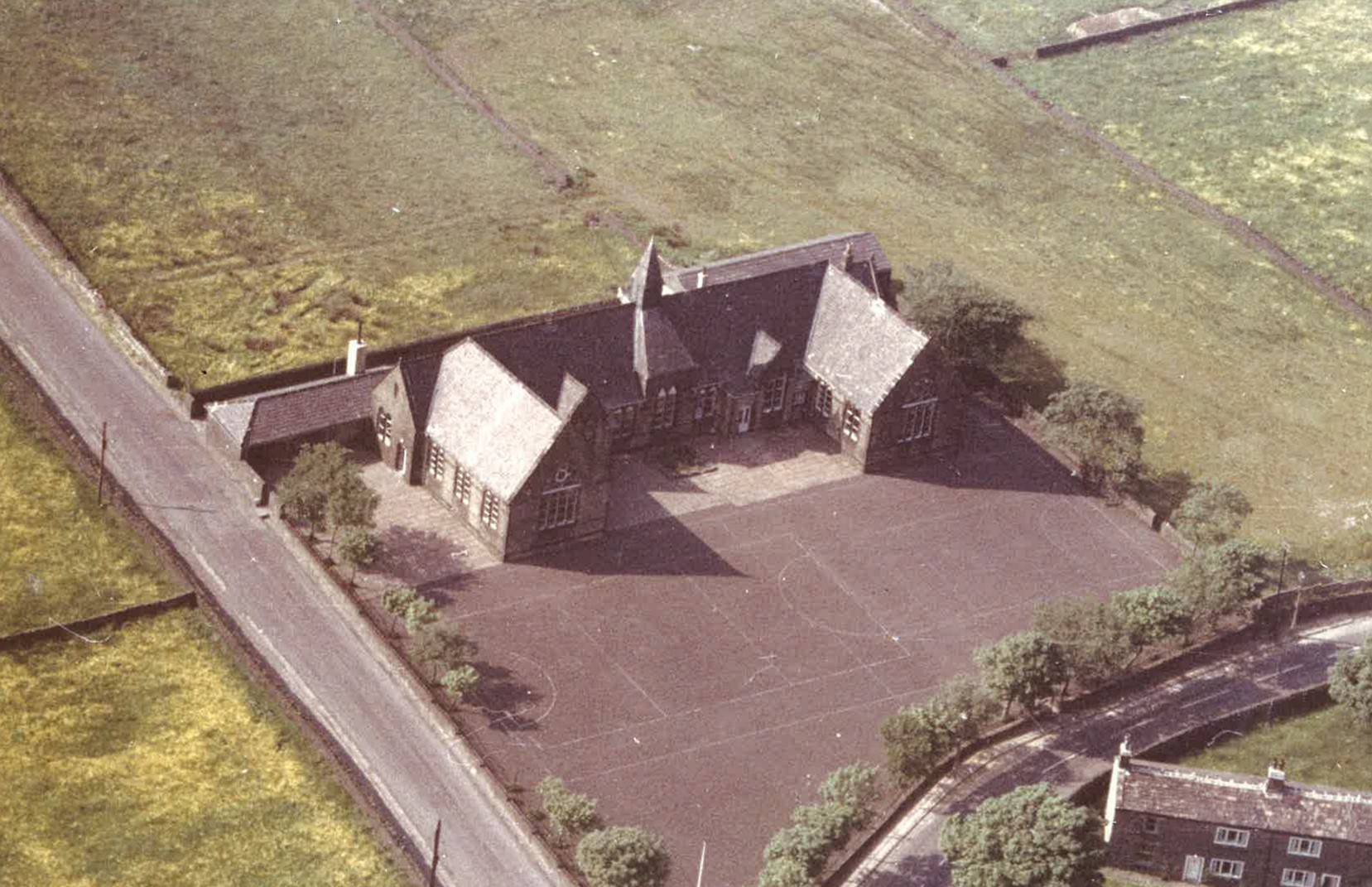 Bradshaw School was officially opened on August 27th 1877. It was named 'Bradshaw Board School'. The Headmaster was Mr Turner (no relation to our current Head Teacher, Mrs Turner). The school consisted of a boy's department, girl's department and an infant's department. The school opened with 6 boys, 5 girls and 4 infants. This small attendance was said to be due to the fact that it was not generally known the school had opened on said day, also the completion of the school had been delayed. As word spread around the village and surrounding areas of Bradshaw, the school started to admit more pupils.

We have been fortunate enough to read our school's diary books, these were filled in by Head Teachers dating back to the opening of the school in 1877. We have also visited the main library in Halifax town centre along with Beechwood Road library to discover more interesting facts about our school.

We have tried to give you an insight into life at Bradshaw School through the years with examples of events and how we were involved in our country's history.

Until the year 1815, there were no schools for the children of Bradshaw and the surrounding districts, the only teaching the children received was at Sunday schools, such as Mount Zion.

Miss Elizabeth Wadsworth of 'Holdsworth House' decided she would give a sum of money to build a school so that the children of the area could receive an education. She had a school built at Popples which could hold 30 children in the one room.

In 1877 an even bigger school was built called 'Bradshaw Board School'.

This is where our journey back in time begins...

Bradshaw Village is in the countryside; the Bradshaw School was mainly surrounded by farming land and fields. A lot of the children who attended Bradshaw came part-time, some children had to work in the local mills and family businesses. This affected attendance rates and education levels:

Another major reason for poor attendance was illness. Any case of illness was taken seriously as medical knowledge was not as experienced as today. The logs record that many absences were due to illness:

6/5/1889 – 'School closed for two weeks due to measles epidemic, advised to remain closed until measles have subsided'

22/4/1892 – There was a recorded outbreak of small pox, the log showed 'some parents afraid of sending their children to school'

Unfortunately some children did not recover. On 9/12/1885 the log book states:

Sometimes the schools poor attendance was not down to the children and their families or any illnesses, the log books report that sometimes Bradshaw staff did not help keep the attendance level high:

22/4/1879 – 'Bradshaw School was forced to close for the day as the school cleaner had let the fire go out'  this meant the school was too cold for learning.

12/4/1880 – The school was very cold – this was because the school cleaner refused to keep the fire alight. Mr Turner recorded, 'I shall report this to the meeting of the board'

The School cleaner did come in useful sometimes...

18/2/1880 – 'A boy named A Roberts haw had an accident in the playground, he was wrestling with another boy. He was carried home by the school cleaner – case not serious'

Other members of staff seemed to cause trouble for the Headmaster...

1/12/1881 – The Headmaster reported about a teacher, 'Holden's lessons unprepared again today. He knows absolutely nothing about his geography'

7/3/1882 – The same teacher had to be repeatedly questioned about his teaching skills. The log book records that Mr Holden's father decided to pay the Headmaster a visit, he complained about the treatment of his son, the Headmaster wrote, 'He says that , I work him too hard and am too harsh with him' Mr Turner continued, 'I am quite justified'

Back in the 1800's, it was apparently the norm for a father to come into an adult's workplace and approach their employer. Another Teacher, named Mr Priestley's father, also complained to Mr Turner about his son's treatment at work, this was on 9/11/1883.

In the 1800's the children's punishment was very different today, at Bradshaw School we have our behaviour policy to encourage good behaviour. The Headmaster and teachers permitted to punish the children, it was also introduced 25/4/1895 that teaching assistants were given permission to inflict corporal punishment. 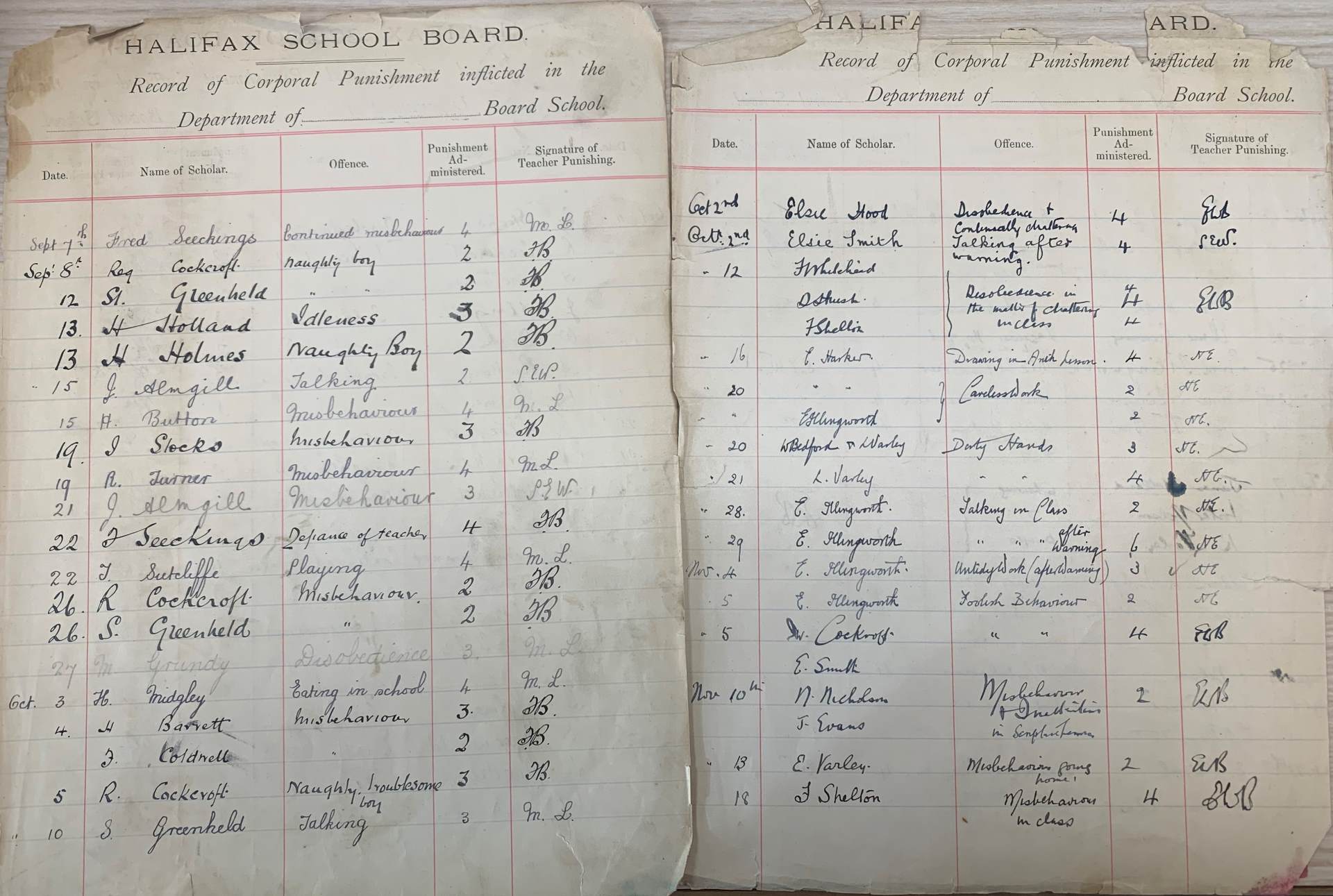 The log books show several entries of punishment to children, here are just a few:

3/9/1878 – '2 boys came in late this afternoon and as speaking to them made no impression they were both caned. They promised to come at the proper time in future'

25/5/1894 – 'Punished T.Hill with strap for stupidity and trifling during lessons'

12/9/1897 – 'Punished S.Bates for inattention to orders. He is a complete nuisance to the Junior Teachers unless punishment be used'

24/3/1891 – 'have been compelled to punish A.Wade for repeatedly coming to school in almost slovenly and filthy condition'

21/7/1879 – A boy named J.Sutcliffe was punished for truanting by the headmaster, the boy also got punished for taking another pupil with him. The log book reported, 'his grandmother came at noon to enquire about him, I was obliged to tell her to go away.'

The children could also get punished for their behaviour outside of school:

At Bradshaw School we pride ourselves on the fact we never close due to weather conditions, but it was reported 4/3/1880 the school was forced to close for the first time, the log book reports a few weather related closures:

14/1/1895 – 'Only a few children came to school as roads were blocked with snow. These had their feet so wet that it was not deemed advisable to retain them so they were sent home'

On the 16th June 1886 Bradshaw School opened as a mixed department, 101 boys and girls attended in the morning followed by another 30 children in the afternoon.

The school soon started to get sports teams to represent the school.

The definite highlight of the 1800's seemed to be the Royal Wedding of Duke of York and Princess Mary of Teck. Bradshaw School closed for the celebrations for two days, 6/7/1893. 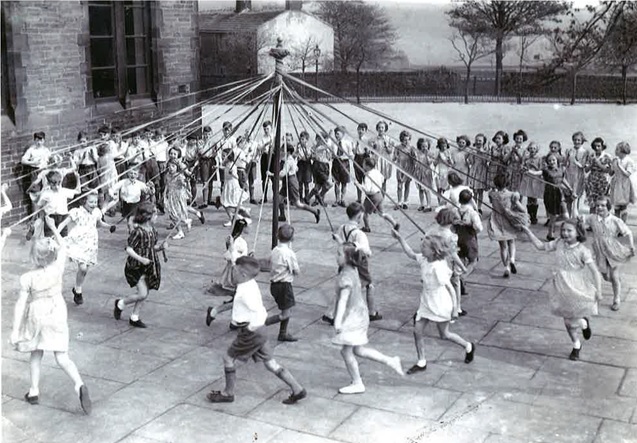 As years went by and times changed as did the schooling system. Our next log book dates 1920s – 1990s, below are more interesting events and examples of Bradshaw School throughout the years.

Our school seemed to take part in a lot sporting activities, and by the look of the results we were pretty good!

1/3/1921 – 'In the games lesson the football team played a match with the Mixenden School team on the ground near Bradshaw Tavern.

Illnesses and weather were still a major factor in attendance issues:

16/1/1922 – 'Heavy snow had fallen during the weekend (over 6") the very small attendance interfered seriously with the work of the school. The temperatures throughout the school were too low'

The minimum period away from school was 6 weeks.

Illness was not always to blame...

The Headmaster in 1921, Mr Baxendale who lived at Beechwood Road, liked to report the good as well as the poor attendance:

'The afternoon attendance was plenty, half timers not working owing to scarcity of coal.'

In the 1900's Bradshaw school seemed to take part in a lot of local events and school trips.

3/9/1920 'Bradshaw was visited by 60 children from Sunnyside school friendly games at cricket and basket ball were played before tea, after tea the Bradshaw children took their friends to Ogden, Soil Hill, the source of Ovenden Beck, onto a farm, the children left at 7pm'

Corporal punishment did not seem to be listed as much although Bradshaw School did not stand for unruly or untidy children, one boy was repeatedly sent home.

10/10/1927 – 'J Lightfoot has not shown any improvement in body cleanliness. His shirt proved to be deplorably filthy'

Bradshaw School had to deal with the children and their parents. One family were recorded in the log a few times (name changed) on 17/10/1927, a Mr Smith appeared at school 'brawling and shouting for his children' he was asked to leave the school premises. When Mr Smith refused the police were called. Mr Smith reported the Headmaster to the Education Office 'He had made out a case against my treatment of him'.

It was later recorded on 8/7/1928 that there had been a burglary nearby, the culprits were Mr Smith's children 'Master Smith found with stolen goods in his possession, his sister had broken a window in Bradshaw Lane and both children had helped themselves' The same Mr Smith reported Bradshaw School on 9/9/1929 claiming a teacher had damaged his son's clothing 'a seam in his jersey was open 1½ inch' . The daughter of the family was reported on 20/3/1931 'appeared at school with a nasty scalp wound after some perseverance she told me her Father had struck her about the head with a buckle end of his strap' . This matter was reported, the log also says Mr Smith has been reported for ill treatment of his children. Both children were reported truanting and stealing on 28/4/1931. The situation must have got out of hand because on 11/5/1931 a Dr Hejnermann 'came to school to examine the Smith girl's mental state'  the doctor spoke to the girl's teachers and father 'Dr Hejnermann is endeavouring to find some residential school or home for a private observation'  the girl admitted 'having got goods on false pretences from 2 sweet shops in Ovenden'.

The children's father came to school 'the children had stolen from his pocket while he slept'  he admitted the children were out of control. The boy was sent to Shadwell Industrial School and the girl was on probation for 12 months.

Our Royal Family featured quite a bit in the 1920's and 30's with a few recorded events:

After the death of King George the 5th, the country held street parties and took days off work and school to celebrate the new King's coronation, unfortunately for Bradshaw School they could not take part –

'It was decided in view of the severity of the measles epidemic, it would be advisable for Bradshaw School to withdraw from the joint Coronation treat to be held by the schools of the district in Ovenden on May 13th'

Unfortunately, for Bradshaw School and the rest of the country that would not be last time they heard of a war. The first recordings of World War 2 were on 14/10/1938.

In the log book the war is referred to as 'The international situation'. Bradshaw children were sent home on 4/9/1939 and told 'to watch the local press for further announcements' . The children were told to return on September 11th and to bring their gas masks. Female members of staff were excused from work 22/9/1939 to help in the making of gas mask covers. The Head Teacher was excused of his duties to help in the preparation of Air raid shelters.

5/2/1940 - Bradshaw School had to close due to severe snow storms. Several roads were blocked.

Teachers held meetings about what rules they should follow if stray enemy aircrafts should drop bombs in the neighbourhood of the school.

'Each teacher to be responsible for the children in the class, taking cover in the room, under desks and tables etc.'

27/2/1941 – '79 children were served a dinner of Hot Pot and Roly Poly pudding. This meal had been prepared by the voluntary helpers of the shelter station in the kitchen recently erected in the boy's yard'

30/9/1941 - Bradshaw School had a savings scheme a little bit different to any scheme we have today.

'End of summer savings campaign. The schools objective of raising sufficient to purchase a Machine gun (£100) was achieved.

17/4/1941 – 'This afternoon, during an alert period in a neighbouring area the children were kept in the air raid shelters'

Bradshaw celebrated with the rest of the country in 1945:

Do you recognise anyone? If you have any photos of our school's past please share them : karen.kenny@bradshaw.calderdale.sch.uk